The River House in Scott City, Missouri has a very fitting name. It sits directly on the banks of the Mississippi River and offers tranquil views year round. The location is far from the most impressive aspect of this project. The River House, built by owner and general contractor Ivan Griffin, is a spectacle in and of itself. Constructed using BuildBlock ICFs, this home performs to the highest standards and offers strength and functionality that will last for generations. To top it all off, this home has been selected as the 2nd runner-up at the 2018 ICF Builder Award in the category of small residential. 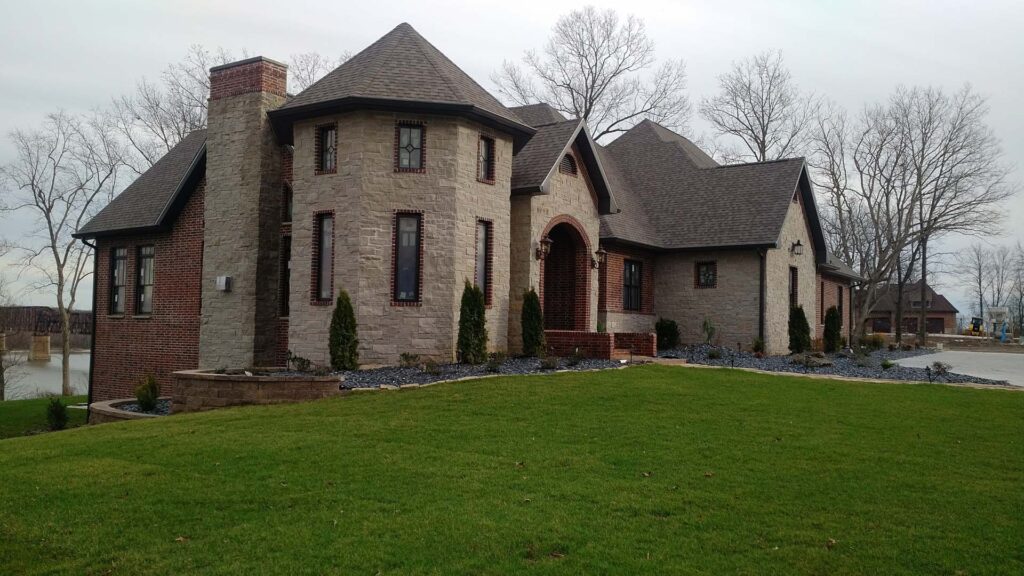 The owner/builder had never worked with ICFs before but was impressed by the benefits that ICF construction offers, and wanted to try something new. The structure itself had several complex areas that took some diligent planning and research before beginning. The ICF walls extend two stories so the walls are very high. There is also a turret that was constructed out of several 45-degree corner forms. The turret also has several windows which added to the level of difficulty; each turn had to be cut, strapped and braced with precision. The rest of the house includes large openings for windows and doors, all of which were completed in a way that was very impressive for a first time ICF homebuilder.

The crew that did all of the sheetrock work were hesitant to bid the job because of the ICF. They had never worked with it before but after a little education they took on the job and found the material very easy to work with.

The ICF portion of this house went up relatively quickly given the fact that it was the builders first time working with ICFs. You can see from the construction photos that Mr. Griffin kept and extremely clean and organized job-site. The walls were stacked and braced very efficiently. The result is walls that are incredibly straight and several large openings that are perfectly straight and plumb. The walls are solid through and through with no voids present. The home is airtight and maximizes all of the benefits of ICF construction.

This is the first ICF home in the area so it drew a fair amount of attention from the community. The house is designed by Ivan’s wife Sue Griffin and sits beautifully on a site backing up to the Mississippi River. The 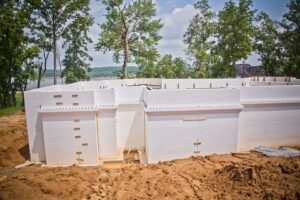 The exterior of the home, displaying brick ledge forms

inside of the home has many large openings giving the interior an open feel. The back of the house, which offers views of the river is thoughtfully completed with several windows, a walkout deck, and large patio. The turret, vaulted ceilings, and arched doorways give the house a castle feel and make it seem even larger than it is. The two different tones of brick on the outside of the home work to break up the design and give the house an amazing amount of curb (and river) appeal.

The house is very solid. The owners commented that the home is very quiet and offers a very peaceful living environment. The final months of construction took place during the summer and the owners were able to keep the air-conditioning units off until mid-July. Even with tradesmen coming in and out of the house, the interior temperature stayed steady at 71 degrees with very little AC.

The Griffin family is very satisfied, not only with the finished home but also with how easy they found the ICFs to work with. The home has inspired others in the area to build with ICFs, including Griffin’s son. They are in the process of completing his ICF home now. Griffin stated that BuildBlock was chosen because he felt that it would be the easiest to build with. He was especially impressed by the forms tight one-inch interlock.

Griffin stated that as a novice to ICF, it was incredibly refreshing to be able to learn a new skill with a product that was easy to work with. There is also a great deal of value in the fact BuildBlock don’t require any additional materials to hold the forms together such as clips or zip ties. Finally, the BuildBlock team was readily available to provide tips, training, and resources making this home a great success that will serve the Griffin’s for years to come.