The first ICF home in Duncan, Oklahoma is recognized as a top project at the 2018 ICF Builder Awards

Max Daughtrey wanted to build a home for himself that performed exceptionally well but looked like “a normal house”. To accomplish this goal, he chose to build with ICFs. Daughtrey was familiar with the many benefits of building with ICFs and after extensive research, he felt that BuildBlock was the best block to meet his needs. Let’s take a look at his house. 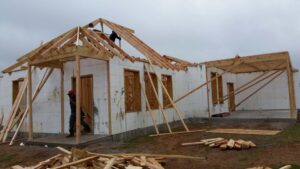 The exterior of the home during construction

Daughtrey acted as the general contractor on this project. He stated that there was a bit of a learning curve in working with ICFs. This was especially apparent when working with the plumbing and electrical services. BuildBlock and the ICF Installer, Jeff Bartlet with BuildBlock of Central Oklahoma, worked with the owner to make sure he was educated and ready to build. The structure itself has many inside and outside corners and some rooms in the house (specifically the master bedroom) has walls with several windows next to each other.

The ICF portion of the job was completed quickly without any major hiccups. Jeff Bartlet with BuildBlock of Central Oklahoma did a great job during construction. Jeff and a small crew of 3 and completed the job quickly and efficiently. The walls were expertly poured and consolidated and the home inspector stated that the walls were straighter than most wood-framed homes.

The home utilizes a modern, open kitchen design. The living room has a large cathedral ceiling and there are raised ceilings in the master bedroom as well. The home sits on a sizable plot of land and the back patio is complete with a large koi pond. 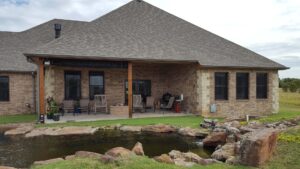 Daughtrey got exactly what he wanted out of the home. The design of the house fits in nicely in the neighborhood but performs like nothing else in the area. The ICFs provide incredible insulation and are paired with geothermal heating and cooling. According to a report by CenterPoint Energy (see below) the home uses 89% less energy than a select few homes in the area that are ranked as “energy efficient”. It is hands down the most efficient home in the area. The owners are spending an average of $25 a month to heat the home in the winter and $30 a month to cool it in the summer. Daughtrey received a $1,400 rebate on their city utility bill because of the homes incredible efficiency.

At the time of construction, this was the only ICF house in Duncan, Oklahoma and only the 3rd in southern Oklahoma. Daughtrey stated that many contractors, city engineers, and neighbors come to look at the house during construction. “It was like a caravan,” he said. These visitors asked a lot of questions and made return visits to see the materials in action and learn about the kind of home that ICFs produce. The build of this project and the results of the finished home have gone a long way in changing the minds of local builders, contractors, homeowners, and city planners.

A Home to be Proud Of

The homeowners couldn’t be happier with their finished home. They commented on how comfortable, quiet, and efficient the house is. Oklahoma is in the middle of tornado alley and has a high danger of wildfire, earthquakes, and other natural disasters. Through choosing ICFs, the owner has peace of mind when it comes to the home’s ability to stand up to natural disaster and keep him and his family safe. The house has quickly become the envy of their neighbors and the pride of the owners.